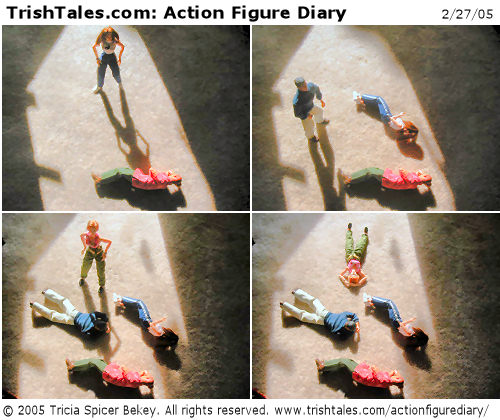 I went for something a little different this time. I like to experiment.

This shoot was much harder than I thought it would be, because the action figures wouldn't stand up on the carpet. Jane was so impossible that I eventually had to stick a bendy straw in the back of her belt to brace her upright, and then angle her so the shadow of the straw wouldn't show.

With the added pressure of being worried about losing the sunbeam, I was a bit stressed on this one. Ironic really, since it's supposed to evoke a lazy, sunny day.

I was so worried that people would be put off by an episode of Action Figure Diary without words. Turns out that sunbeam naps are a crowd pleaser!

NAME IS REQUIRED. Your comment will NOT be posted if you leave the Name field blank.
E-mail/HTTP is optional--OK to leave blank. FYI, e-mail is kept private (sent to TSB only); web address is made public (posted with your comment).

Even the webcomic text is searchable!